There is a reason why humans have long considered red to be the color of attraction, sensuality, and passion. Red induced psychological and physiological effects in humans, directly influencing sexual perception and attractiveness. The color has also been shown to affect competitive and sports performance, enhance sexual signaling and dominance in males.

Let us simply get into the thick of it and say at as we see it – for human males, red is associated with increased sexual attractiveness.  Compared to the other chromatic and achromatic colors, red pushes men to view women as more sexually desirable and attractive, modifying sexual perception and acting as a sexual signal. Women that are associated with a red context or object are seen as more lustful and sensual.

Men are unaware of this effect and it does not impact their overall perception of a woman’s kindness, intelligence or likeability.

In many vertebrates, it has been observed that both males and females are attracted to red on their counterparts, as it used as a signal of male status and dominance. A series of experiments tried to replicate this “red mating flag” in humans. 7 experiments showed that while males perceived the women that were placed in a red “setting” (background/clothes/lipstick) as more attractive than the ones in other colors, the same effect did not occur with women.

Red did not influence the women’s perceptions of attractiveness towards the men or other women.

This would be the right time to mention that it also did not affect how heterosexual men perceived other men.

The hypothesis behind this particular effect argued that human males are biologically predisposed to be attracted to the color red when associated with potential mates. It has been considered that red signals impending ovulation and sexual courtship.

If we were to take it to a more graphic image – deepened breath, droplets of sweat, rising in body temperature, caressing skin – all lead to a reddening of certain body areas. Such images are deeply sexual, well embedded into human minds and deeply associated with the color red.

Now to look at this matter in a different light, the luminance contrast between facial skin and features is significantly greater in women compared to men. For example, if we were to apply increased luminance contrast in black and white photographs – this will enhance femininity in a female’s face but greatly reduce attractiveness and masculinity in a male’s face. This is important to note, as in Caucasians the luminance contrast is largely between the redness of the skin and lips, playing with red tonalities will affect the sexual perception. 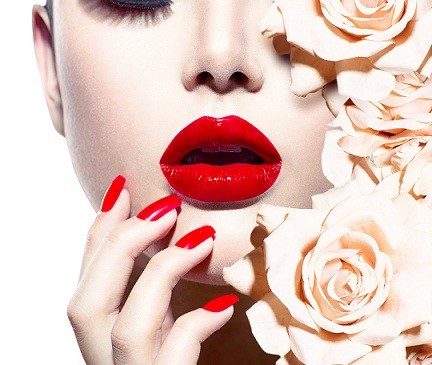 Red lips have been considered a staple of beauty and sexuality along the ages and across different cultures all around the world.

One study allowed the participants to manipulate the color of the lips of the male and female face photos that they were shown in order to possibly enhance or decrease the perceived attractiveness of the faces.

The results found that participants increased the redness contrast to enhance attractiveness and femininity of the female faces, but reduced it in order to enhance the masculinity of male faces.

The color red is deeply tied to our biological heritage and is an effective sexual signal, perceived at a subconscious level and which directly influences our sexual perception of potential mates. It is important to note that today’s marketing and propaganda has only deepened our sexual ties to the color red. In this day and age, we can safely say that both women and men associate the color red with romance, passion and other more “raw” desires.

It might not be such a bad idea to have a little red dress – a sharp red tie, in your wardrobe for those nights out when you’re in need of some extra attention.

Check out the 7 Scientifically Proven Aphrodisiacs for more methods to raise sexual desire.