CBD(Cannabidiol) for Parkinson’s disease patients is emerging as the much sought out relief from the symptoms that plague their daily lives.

Parkinson’s disease is progressive neurodegenerative disease characterized by the degeneration of dopaminergic neurons. People that suffer from Parkinson’s disease are afflicted with a series of motor and cognitive symptoms that drastically affects their ability to lead a normal life.

The most common cognitive and psychiatric manifestations are dementia and depression.  In some cases, Parkinson’s can also cause delusions, hallucinations, irritability, anxiety and apathy. Also, they often have disturbing sensory symptoms and pain in affected limbs.

These cognitive afflictions can sometimes be more impactful than the motor problems and are unfortunately harder to diagnose, treat and control.

The medical treatment of Parkinson’s disease aims to control the symptoms and signs of this condition for as long as possible while keeping adverse effects to a minimum.

While Levodopa provides the greatest control of motor symptoms and signs and presents the fewest adverse effects in the short term usage; long-term use of levodopa leads to side effects which are difficult to resolve.

Cannabidiol (CBD) is one of the main components of Cannabis sativa, however, it does not have any psychoactive effects and it is safe for humans to consume. Pharmacological studies on CBD have shown that this compound has numerous beneficial properties for the human body, including:

The neuroprotective properties of CBD have been receiving increasing attention from the medical community for potential use in treating neurodegenerative diseases including Parkinson’s disease Huntington’s disease, and Alzheimer’s disease.

Cannabinoids exert their effects by interacting with the body’s endocannabinoid system. By activating the CB1 and CB2 cannabinoid receptor, CBD can actually modulate the release of dopamine at the central nervous system level.

Cannabinoids have been shown to increase both tonic and phasic dopamine transmission, as well as the activity of the systems that prevent dopamine neural activity. This increase in dopamine is one of the main reasons why CBD could be for Parkinson’s patients extremely beneficial.

CBD as a Neuroprotective Agent

Cannabidiol has demonstrated its ability to support the health of neural cells. Through its antioxidant properties, it prevents cell damage caused by free radicals, thus extending the life of neurons. It also has the ability to activate a receptor that encourages the formation of new mitochondria(the cell’s energy factory).

The cannabinoids are also able to suppress the glial activation, excitotoxicity, and oxidative injury that cause the degeneration of the dopamine-releasing neurons. Thus, further encouraging neuron longevity and health.

While cannabinoids have not been able to prevent or stop the progression of the disease; they are able to help patients with Parkinson’s disease manage their symptoms and thus greatly improve their day to day life. 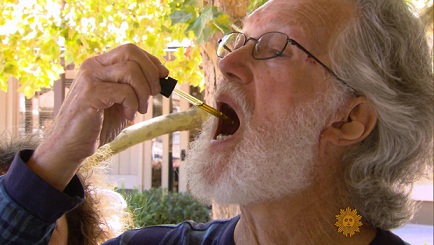 In one survey, Parkinson’s disease patients that have used cannabinoids to control their symptoms have ranked it as the most effective treatment option out of prayer, vitamins, massage, art therapy, relaxation, and music therapy.

If you would like to know more about the CBD and its benefits for the human body, we recommend you read our Breakthrough in Cannabis Curing Cancer Research and Medical Marijuana for Hypothyroidism articles.